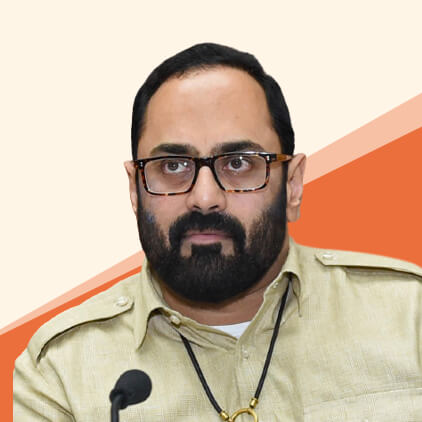 Rajeev Chandrasekhar
Minister of State
Government of India
Rajeev Chandrasekhar is the Union Minister of State for Electronics and Information Technology and Union Minister of State for Skill Development and Entrepreneurship.
He is an Indian politician and entrepreneur, technocrat and was serving his third term as a Member of Parliament in the upper house (Rajya Sabha) from BJP representing Karnataka. He also served as National Spokesperson of BJP and was vice-chairman of the Kerala wing of the BJP-led coalition National Democratic Alliance.
Rajeev's political work focuses on protecting Bengaluru and Bengalureans' interests with Urban Governance issues, Transforming India through Governance and Economic reforms, Veteran and Armed Forces issues, Protecting our Children etc. For causes he believes in and supports, he has - apart from raising these in Parliament, actively approached the courts to intervene on behalf of citizens as in the case of Sec 66A, Aadhaar privacy issues and voting rights for Armed Forces. He is an active MP and his work and its effects are available through periodic report cards. He is widely recognized as the most Informed and active MP on Digital India, Internet and Technology issues, Spectrum Allocation, Net Neutrality, Consumer rights in cyberspace policies and regulatory matters and is unafraid to dive into issues that need support after informing himself well on these.
Additionally, he has focused on and taken up a wide array of macro-economic and micro-economic issues that include restructuring of Public Sector Banks, creating Transparency in the management of Public Assets and repairing key sectors in the economy to revive growth amongst others. Rajeev's insight made him one of the first individuals to raise concerns regarding the ad hoc allocation of 2G licences starting 2007 - which led to cancellation of 122 licences by the Supreme Court of India in 2012.
It was his relentless campaign and later a petition in the Supreme Court that led to Armed Forces personnel getting the right to vote in their place of posting in the 2014 General Elections and further electoral reforms to bring the facility of e-Postal Ballot to Armed Forces. After the Uri Terror attack in September 2016, he was the first MP in India to have challenged the MFN status granted to Pakistan and submitted a Private Member's Bill in the Rajya Sabha on 18 November 2016 titled: "The Declaration of Countries as Sponsor of Terrorism Bill, 2016". In February 2016, Rajeev was felicitated by the General Officer Commanding-in- Chief, Western Command, Lt Gen KJ Singh, PVSM, AVSM (Bar) with the GOC-in- C Commendation Card at HQ Western Command, Chandigarh for his support and work for the Armed Forces, veterans, and their families.