Straddling the lofty digital voyage of excellence with Manorama Online

Two-and-a-half decades ago, on October 17, 1997, to be precise, Prince Philip launched the online editions of Malayala Manorama and The Week magazine in Kochi, a year ahead of Google’s official unveiling by Larry Page and Sergey Brin.

Since then, Manorama Online has forayed into umpteen unexplored digital terrain's, far ahead of the times.

Exploration is a way of life in Manorama Online and excellence is its hallmark.

Its On-Demand Portal, the first news app in Malayalam and E-paper bears testimony to the enduring legacy of class and innovation, the pursuit of which is ingrained in the psyche of the Malayala Manorama Group.

This relentless quest for eminence was celebrated by the World Association of Newspapers and News Publishers (WAN-IFRA) when it chose Manorama Online as the World’s Best News site in 2016, ahead of the top websites in leading languages.

Manorama Online’s lofty achievements are an off-shoot of the ‘complete portal’ approach adopted by the visionary patrons of the portal and a workforce constantly striving for innovation.

The approach aims at involving all segments of society, including children, students, women and adults in comprehensive subjects that affect them.

Techspectations, Kerala’s niche digital summit, is a classic platform straddling the path of excellence pioneered by Manorama Online in its priceless urge to leverage the potential of Kerala. Stay ahead of the curve of digital enlightenment with Manorama Online.

Journey of Techspectations
A mutiny of innovations & disruptions

The journey is indeed the destination. As Techspectations reaches a milestone 5th edition, the overwhelming influence of tech is seeping into our lives in an unprecedented way. Previous editions of Techspectations, handholded by CEOs, CXOs and the glitterati of the tech world, traversed through an illuminating range of topics. These domains weren't just niche – it had touched the psyche of the layman in innumerable ways hitherto unthought of. Many years ago, no one would have imagined the humble mobile phone taking the roles of your banker, healthcare expert, calendar, news source or camera, for sure. So the immense potential of technology and its pitfalls were the subjects of discussion in Techspectations.

The marquee platform for enlightened discourse offered by Manorama Online has covered a wide range of topics including:
This extraordinary voyage has seen the illuminated presence of tech mavens, policy wonks, government executives and influential voices. Key speakers in previous editions were:
This edition of Techspectations, which coincides with the 25th anniversary of the launch of Manorama Online, will have MO@25: Absorb, evolve & thrive in New Digital Order as its theme. It will delve on the huge potential as well as disruptive dynamics of technology as it evolves at a breakneck pace. Embrace the mutiny of technology with Techspectations 2023. Make yourself heard.
Know more...
Techspectations 2023
MO@25: Absorb, evolve & thrive in New Digital Order.

Technology is a great leveller. It is an overwhelming disruptor also. Infosys honcho N R Narayana Murthy was spot on when he identified improved transparency and shrinking of distance and class barriers as off-shoots of the leveller impact technology delivers. Innovative technology also disrupts the status quo, with a prime example being e-commerce eating into small businesses.

With 5G being rolled out and Internet of Things (IoT) set to overhaul the way we live, thought leaders are investing considerable time and energy to figure out ways to stay afloat and surge ahead as the wave of technological innovations sweep our livelihoods in all spheres. As Manorama Online celebrates 25 years of its online presence, it is only natural for us to roll out the niche platform of Techspectations, our marquee digital summit, to delve into novel concepts and fascinating ideas on this count. The fifth edition of Techspectations 23’, with ‘MO@25: Absorb, evolve & thrive in New Digital Order’ as its theme, will dive deep into this complex scenario with global tech leaders, angel investors and domain experts sharing their outlook. The discussion points that will illuminate the sessions include:

The audience of Techspectations will range from CEOs and CXOs
to content creators and social media influencers. 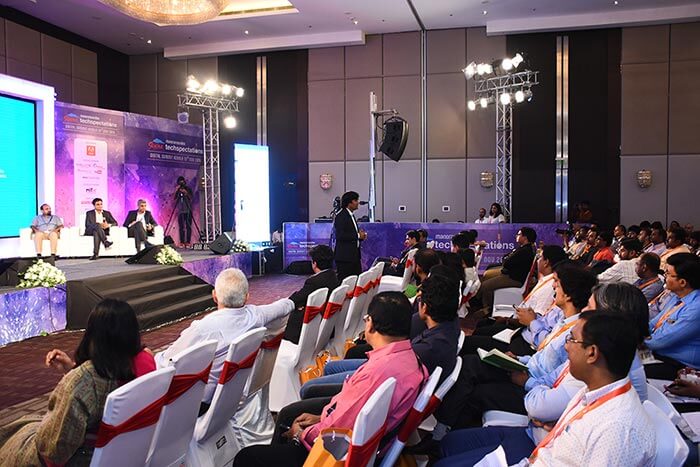